Wow, it’s been over a month since my last blog entry. This was a deliberate move on my part as, after careful consideration I decided that I would not do a weekly blog during our trip back to the UK as it was not all directly related to #projectFrance. However, I feel that a summary of our month long trip would be a good idea.

So, we embarked on our 1000km trip back to the UK on 1st June. The primary reason for the trip back was to provide moral support if necessary for our youngest who has been sitting exams. But also, we had a few hospital appointments, and some dental appointments, and as we left the UK amidst a bit of a drama back at the beginning of May we thought it would be lovely to spend some time catching up with family to update them on how our house building/land acquiring plans were going.

First stop was Broadstairs to visit James, Nicola, Henry and Chloe, and we had a lovely visit to the seafront with them

……..and a much looked forward to Indian Takeaway, and an even more looked forward and very much needed bath for me!! It’s not that I hadn’t been showering at all – far from it – it’s just that with only 3 minutes of warm water, showers “a la camping-car” are short and sweet and merely functional. Not like the lovely, relaxing bath with my soothing bath products that I took in their bathroom. Only the promise of the Indian takeaway being ordered was enough to get me out of there. Indian food is something I do miss when in France as there is no such thing as an Indian Restaurant or Takeaway – at least not in rural SW France as are we – maybe in the cities – we haven’t found out yet

We also managed to squeeze a quick catch up with friends Matt and Hannah – who were great friends of Dad and Ann – and it is always lovely to speak to people who know the land well (as they do) and completely “get” what we are trying to achieve.

Then it was off to Chandlers Ford where we used to live. Lots of family to visit here, including my mum, daughter, Martin’s son’s and of course our lovely “daughter-outlaw” Lisa. That’s an ex in-law to you and I. Sadly, a marriage break-up means that she now gets the coveted title of “outlaw” – of which we have a few!! We get on really well with all our “out-laws” – maybe they know something we don’t ha ha!! Enough said about that maybe??? Lisa is also mum to our super cute nearly 4 year old Grandson Max – who we took to the New Forest for some great adventures. 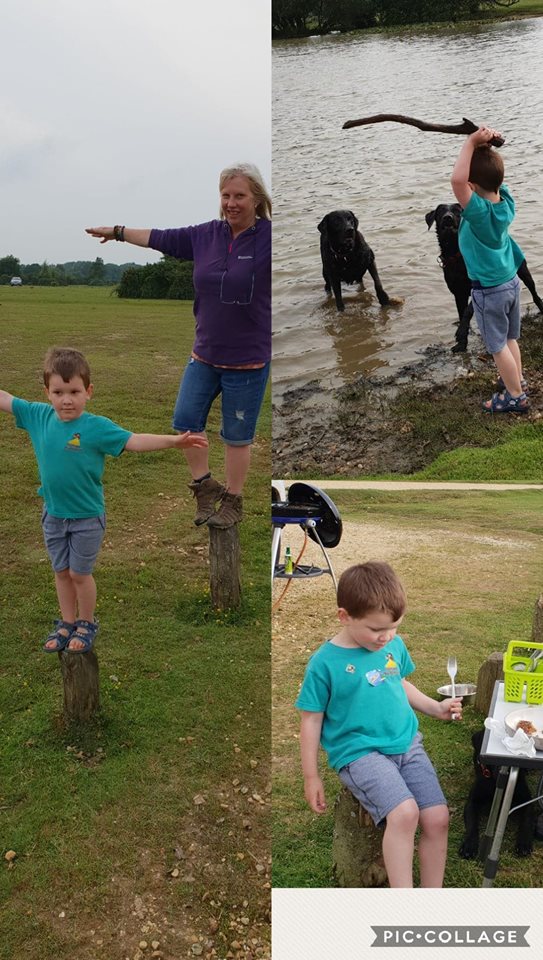 We found a campsite in Ampfield to set up base, negotiated a bit of a discount for a long stay (always on a look out for a bargain and after living rent free for a month in France it was a shock to the system to find campsites cost nearly as much as a mortgage). We were blessed with superb weather for the whole of our trip, and it was really lovely to be able to set up a comfortable base in which we could spread out a bit.

Whilst in Ampfield we re-connected with old neighbours of ours, who used to live a few doors up the road from us until they saw the light and moved away to a place that is more aligned with the life they want to lead – much like us. They now live in a charming house, with lots of land, on which they can enjoy a life of partly self-sufficiency, and look after some gorgeous rescue ponies – Alwyn and Fergus. Martin quite literally bumped into John whilst out walking the dogs, and they recognised each other. This led to an invitation to dinner and then a return visit to us at the campsite. It was so lovely to spend time with like minded people, and even more so because they are all (including their lovely daughters) vegan – so this led to lots of interesting conversations and sharing of recipes – in particular a kale and chickpea and spelt salad which introduced me to spelt and got me back into kale in a huge way. We were given a guided tour of their raised beds and now Martin has purchased a book to help us on our way back in France. We both felt very envious of their beautiful sunset over the stunning Ampfield woods but of course soon we will have our own stunning sunsets over the woods our of our own kitchen windows.

One of the first things to sort out was to find a Mitsubushi L200 – the vehicle we had decided would tick all the boxes for our needs for a vehicle in France. We were lucky to find HULK very quickly into our trip (named due to his number plate) and in order for me to gain confidence we decided that it would make sense for me to follow Martin and Marsha (the motorhome) around when we set off on our inlaws and outlaw visits for a week.

We also caught up with other good friends, and shared a few meals – most notably the cheesiest pizza I have even had – dare I say it TOO cheesy!! Also, a lovely family meal with Ryan popping over from Bournemouth. And did I mention a fair few Gin and Tonics – another thing that I do miss from England and fully intend to take at least 3 bottles back with me each time for the Gin Bar which I will most definitely be having in our new house.

After said daughter had completed exams and celebrated with family 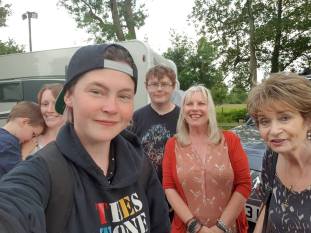 and this anxious mummy was assured that she was happy with how they have gone and was about to embark on a week long bender that would not require parental supervision – we ventured up towards the East of the Country to spend some time with another “outlaw” – this time ex sister in law Sarah, and her partner Gary.

Sarah is the much loved mum of Evan who sadly had a fight with cancer and didn’t win – very tragically lost at the age of 13. Evan’s loss has had a profound effect on all of us. Yes, it was awful to lose my Dad and Step Mum to cancer, but I have no words to describe how I feel about a 13 year old boy having to fight this awful disease. However, time spent with Sarah always is (and always has been) extremely upbeat and fun, she’s funny, brave, kind and clever – and we love her for that.

3 days went quickly and we were soon on our way to my brother Stephen who lives in Colchester. We pitched up at a campsite and picked him up to bring  his over for a homecooked curry, a few beers, and for him to do his part of the paper-work for the transfer of ownership. The said paperwork consisted of no fewer than 52 pages – all of which were in French, and had been sent over VERY late on Saturday evening – the French certainly do like living on a knife edge!!

Thanks to Google Translate and a huge amount of patience we were able to satisfy ourselves that we are not selling our souls, but agreeing with the succession plans according to French law, and I am buying James and Stephen out of their shares so that me and Martin can build on the land. My comedian of a brother (Stephen) had cracked a few jokes about wanting to keep his share and rent it out to me – but as he was talking in Francs and not Euros I figured he had no idea what he was talking about

Then on to North London to visit the notorious Mother In Law!! She’s actually not bad for a MIL – although I always do find that my dear husband resorts back to child like behaviour when he visits and wants to raid the biscuit cupboard and other boy like stuff!! We were able to do a ridiculous amount of washing at her house, and also give the motorhome a much needed and very thorough wash. Although there was plenty of room to park Marsha the Motorhome on her driveway

we stayed inside the house which was a novelty for us – but I found it a bit disconcerting the first night, to have all that space in a bedroom. But another long soak in the bath was much appreciated and caused me to sleep like a baby the second night. We also saw one of my brother in laws, David, whilst there and it was lovely to update him with our plans for our little house. Whilst talking to them both we realised that we will probably be able to fit our teeny little house twice, maybe three times over in MILs house and I wondered if they think we are a bit bonkers. After all, many of the roads in Stanmore are 2 miles long with only 100 or so houses in them. Now we have spent so much time full time in the motorhome it all seems a bit alien to us to have multiple bathrooms, and enough space in a house to watch TV in one room whilst someone else is in another room.

That was the last stop on our epic round the UK in a week trip, and then it was back down to Ampfield for a few days to see everyone down there again before heading back. 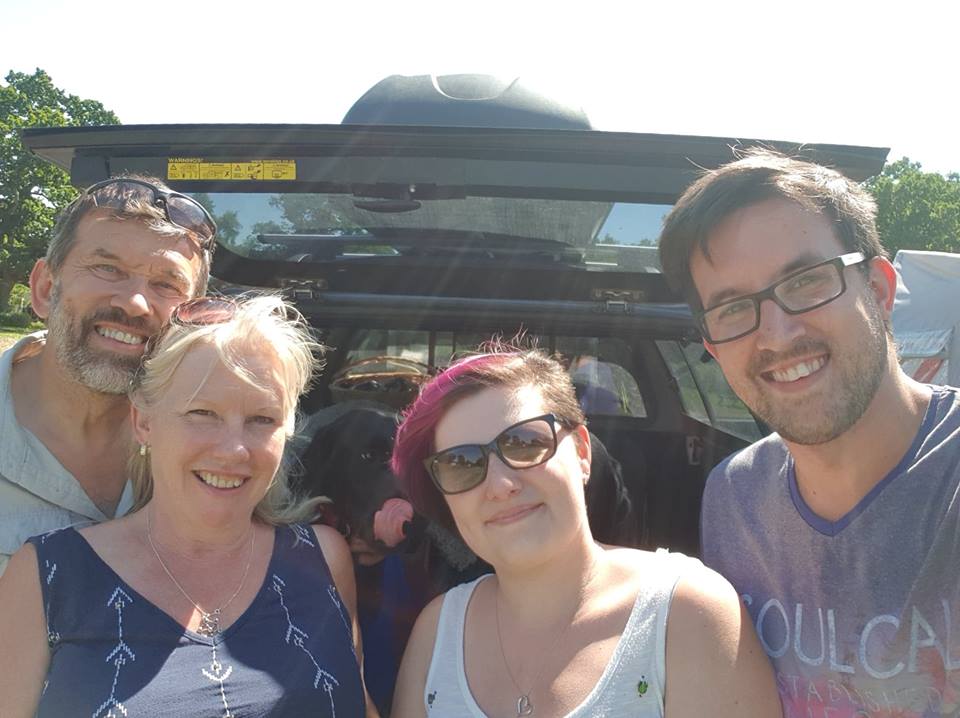 We enjoyed seeing everyone a great deal, but the time spent back in the UK did confirm to us a few things. One being that the roads are so much nicer in France – so quiet in comparison. And also, that we most definitely no longer want the life of a hamster on a wheel- continually running around, getting no-where, trying to earn enough to pay for a life we don’t really want. For that realisation that has come at a time which means we are young enough to really fully reap the benefits of the new life we have chosen, we are very grateful. Our little home on wheels has taught us a lot – most importantly that if it doesn’t fit in a 17 sq metre motorhome we probably don’t need it. We are still adjusting to that life, but it certainly doesn’t feel like a hardship, although we do realise that to some people our lives must appear to be very alien. But, it’s the same for us – we now find the traditional model of domesticity to be quite alien to ourselves – and so, when people’s faces have shown a look of sympathy for the hard life we must be leading without our TV and vast amounts of space we share a wry smile and whisper “if only they knew”.

One thought on “Inlaws, Outlaws and Aliens”