Our House (in the middle of our street)

The builders returned last Monday – thank goodness – I was getting worried that they had been put off coming due to the lack of biscuits!! Despite me promising Philippe that I would keep them well stocked up with biscuits, and sending Martin out whilst I was in hospital to get supplies of biscuits, it had come to my attention that not only had Martin NOT actually given them biscuits, he had also EATEN ALL OF THE BISCUITS that he had bought. I was not impressed “no wonder they didn’t come last week” I snarled at him. “You’re obviously feeling better” Martin said “you’ll getting all grumpy again”. 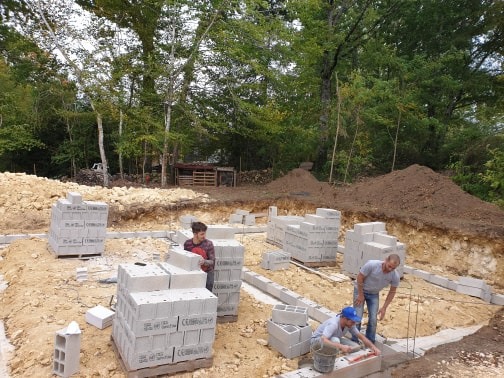 But the builders did turn up on Monday morning – and done a great day’s work on Monday despite no biscuits, and the wall of the concrete foundations soon started to take shape.

Anyway, we went off shopping on Monday afternoon and stocked up on biscuits – which I told Martin he was NOT TO EAT! 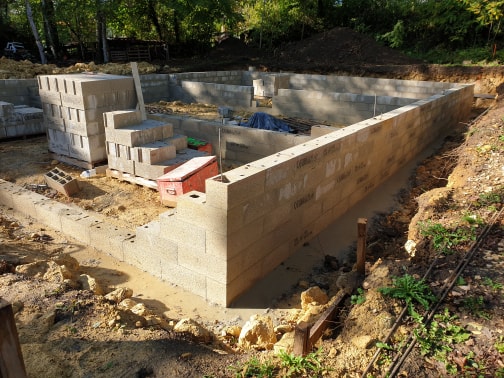 On Tuesday morning it was hammering down with rain – I said to Martin “I bet they won’t come today – it’s awful weather – and no biscuits yesterday either – they must think we are awful”. Anyway, they did turn up and Martin made them all coffee with a lovely plate of biscuits in the morning and again in the afternoon – hopefully they will forgive us now!! Joking aside – they are a lovely bunch of young guys. I commented to Philippe when he came to check things out about how friendly and pleasant, they are. He seemed very surprised and said “of course they are – they have to be”. I said it’s not always the case sadly. Poor guys though – it rained all day from the moment they arrived to just after they packed up for the day – then the sun came out and it was a lovely evening. By the end of the day on Wednesday the external wall was nearly complete – it’s fascinating to see it now – you can get a much better idea of the size of the space we will have.

Watch this little video in which I give a guided tour of our foundations including Luka’s epic fail in leaping into the abyss.

On Thursday Philippe came over with his little manitou (digger) that he had agreed to lend us so that on Friday we could use it to manoeuvre the large TEK panels when they are delivered.

The delivery of the TEK panels has been a bit of a sore point for us. In an ideal world we would have had these delivered to our site the day before Tom our builder is ready to put them up and build our house for us. Part of the appeal of having a TEK panel house was the absence of construction materials in situ, which for a small site like ours really was a strong appeal.

However, good old Brexit put a spanner in the works for us in that department. Although the timber used is European, it goes to the UK to be cut in a factory there. Once upon a time there was a factory in Europe but that closed down. So, the cut panels are shipped out from the UK.

With Boris so hell bent on crashing out of the EU with a No Deal the risk for us was that if we left it until after Brexit to ship them out, we might incur Export charges (which don’t exist now but might do in the case of a No Deal) and maybe even Import charges as well. Something like a 20% tax which was not budgeted for would have completely ruined us – so we simply could not run the risk of that happening. So, we had to make the decision to have the TEK panels shipped out earlier than necessary.

So, the rather large lorry arrived on Friday with it’s very important cargo. It was absolutely torrential rain all morning. I wasn’t feeling great but tried by best for a while to show willing and watch the lorry struggle to get up our track (it couldn’t) and to offer words of encouragement to the driver, and to Martin, Tom and Denis – who between them done about 13 loads on the little Manitou! Watch the video of Denis delivering the TEK panels.

By this time, I had retreated to the Garden House to dry my hair. Perhaps revenge for me skiving off, but when I picked up the towel that had been hanging on my bamboo ladder for a while a huge spider literally leapt off it!! I thank my lucky stars that it leapt off before I wiped my face and hair with it as I am certain I would have had a heart attack. 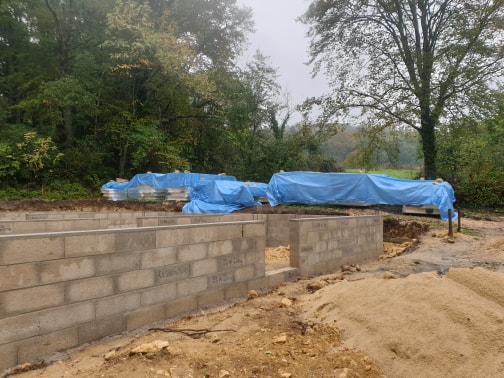 By lunch time our house (well at least part of it – there is more to come soon) was in situ on our land.

When people tell us we are worrying too much, or unnecessarily about Brexit I have to say I find it rather condescending as they have NO CONCEPT WHATSOEVER of what the prospect of a massive Export Charge might do to a build budget and neither do they have to live with their house, on it’s side, laying in the middle of their land. No longer can we park our motor-home where we used to, and no longer can we walk round to our compost heap without crawling over a pile of rocks.

However, we are thrilled to bits to have our house here! Albeit laying on its side looking rather strange!! It’s a visual reminder and reassurance that we are getting closer and closer all the time to realising our dreams.

Like the Madness song that I loved so much when I was young, and dreams of moving to France, and semi retiring were light years away