Put it in perspective

It’s been three weeks since my last entry and I have to say that having our little garden house has made a world of difference to our quality of living standards.

Who would think that living in a shed could be so satisfying? If you had sat me down a year ago and told me that I would be nothing short of ecstatic to have a shed to live in during the daytime I would probably have told you that you are mad!! Or sworn!! Or probably both to be honest.

Indeed, I am sure that there are people who are amongst our group of family, friends and acquaintances, both this side and the other side of the English Channel, who must think that we are a bit strange for being so pleased. And there have been a few quizzical looks, and some slightly sarcastic sounding comments about shed parties, but we have just ignored that and been content in our happy little bubble!

Of course, it is all down to perspective isn’t it?

When you are living in a lovely house somewhere, and someone says to you “here you are – a 17m² shed – put some furniture in it and away you go” well, I suppose that idea isn’t very appealing really. But when you have been living in a cramped, increasingly untidier motor home – suddenly the prospect of doubling your living space overnight is a very exciting prospect indeed!! And as such we have been treating our new space just like home – making it a cosy little space, adding some little touches – putting proper spot lights up, buying a bed settee, and most important of all – creating a Gin Den!!

Now, I’m a bit of a light weight where it comes to drinking alcohol as I don’t drink regularly or often (which yes I know is strange in France) so when I do it tends to go straight to my head. Especially with the large measures which are often poured by friends (my mind is now thinking back to the time when Bernard poured me a G&T which I am convinced was not Gin at all – probably rocket fuel – and was at the very least a quadruple measure – and hey ho!! I was pissed before 4.30pm in the afternoon).

But I digress from the Gin Den……

So, I am partial to a nice G&T and like the boutique gins that are widely available in the UK but no so much in France – so I have been collecting bottles – but not using them up – and when I finally got around to putting all the gin bottles in one place – I counted up no fewer than 13 bottles of different brands of Gin!! I just need an excuse for a party now to get some help in drinking them.

Which leads to a dilemma – we now have a little space in which to entertain – which is exciting – but of course we don’t really have toilet facilities for guests. Back in the Autumn we did attempt to erect a toilet tent for when we had a large gathering – but reports back stated it was not a particularly pleasant experience. So, we are mulling this one over as to how we can overcome this – as being a sociable butterfly I really do want to start offering some return invitations to all the people who have been so kind and generous in inviting us over for coffees, meals, over night stays, shower use, washing machine use and so on.

Anyone who has ever been in a caravan or motor home will instantly understand why these toilet facilities are not suitable to offer up for guests. But, for those of you who are not sure…I might expand on this in more detail one day – but for now, please just know that what goes in has to be emptied out by my dear husband. And as much as he loves all our friends – he doesn’t want to know what you had for dinner last night…if you catch my drift. So, if anyone has any ideas for installing a civilised toilet system as an en-suite to a garden room, but without a sewerage system in place – answers on a post card please.

On the house planning side of things not much has happened of late – we are still waiting for some reports to come back before we can submit the house plans. We have had some site plans sent over for us to review but we were not happy with the perspective that the position of the house gave us. So, we’ve had a bit of too-ing and fro-ing between us and the architect. From his perspective he needs to get our house in the plot with the best orientation to utilise the solar power and also to be able to turn cars around without the need to reverse (apparently that’s a French thing) but from our perspective we (especially me) need to satisfy ourselves that we will get the view that we want from our bed – without cricking our neck!! So, we have been out on the land – looking this way and that way – gauging the necessary angle to get the right perspective!! Hopefully we will get there soon, in the grand scheme of things it is better to spend a bit of extra time to get the right result. .

As Duffy says “It’s been a long and uphill journey…getting to where I am today…..it’s been real tough and I’m still learning, that working hard’s the only way ….Put it in Perspective”

We have both been busy, me with painting the garden room with wood treatment as we are very keen to get the wood protected before the weather changes for the better – as it is in a very sunny spot so would not take long to get sun damaged if we don’t treat it – so that’s a must for finishing soon.

Martin has had the interesting task of starting to clear out the ruin in preparation for our fur family to get bigger. We are hoping to adopt a couple of barn cats which will be semi-wild and can live in the sheltered part of the ruin. But first, there is about 100 years’ worth of rubbish to remove – and that’s not just the load of old stuff my dad and step-mum put in there – there is disintegrated render which is just powder, rotten tree trunks, mulchy leaves, tiles, stones, bricks…. you name it – we have it. Oh, and cobwebs that are straight out of Arachnophobia III……. shudder!

It has been all I can bear to stand gingerly by the door and watch poor Martin shovel up spade after spade of shit into a wheelbarrow and then go through the painstaking task of sorting it out into piles of tiles, stones and then rubbish.

We are keeping the stones as we hope to use them in the dry-stone walling around the edge of the raised terrace of our house, and we think the tiles might make a nice mosaic path somewhere – not sure where yet – but it will definitely need to be a mosaic as the majority of them are broken.

It would appear that dad placed old cupboards on top of the really old rubble before putting their carefully wrapped bundles of belongings on top of that, so the stuff underneath is really, really old. Martin became quite preoccupied with the question “I wonder where the owner’s poop is” as he was shovelling the stuff up. There’s no sign of a bathroom anywhere – but we think we may have sussed out where the original cooking area might have been. Martin also discovered hanging from a beam a tiny, very old key! We have no idea what it’s for – it’s not either of the doors.

It’s all very exciting as it unfolds, but also very poignant think that my dad’s dreams ended here in this ruin. At some point in time they packaged up their belongings to store here – knowing he was very ill, but at that time not realising they would NEVER return here to complete their dreams. There are really well packaged and labelled up parcels of stuff – which as of yet I have not been in the right frame of mind to even start unpeeling to reveal the contents – but that will come – soon, I think. But there are also piles and piles of damaged items – bags that have begun to decompose once exposed to the sunlight and boxes crushed under the weight of the floor that collapsed in when at some point a huge tree trunk fell straight through the roof!!

So much stuff damaged – and to think that this was once their life.

The saddest image for me was the sight of dad’s old brown working shoes peeking through a damaged black bin bag. 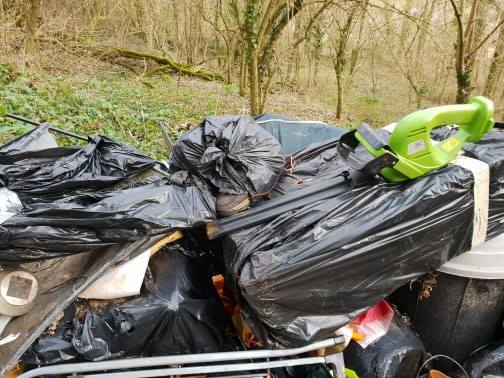 His shoes that he would have packed away – hoping to return soon to pick up where he left off. And that breaks my heart in some ways, but equally I know that Martin and I would not be living our life here in this way if his dream had not come to an end. So I suppose, again, it all depends on which perspective you look at this from – is it the sad tragedy – or is it the amazing opportunity!!

I know which perspective I prefer to look from.

7 thoughts on “Put it in perspective”